Hey guys! I hope everyone has been enjoying the on and off nice weather we’ve been having. I’ve been trying to spend as much time outside as I can. Mostly that means doing yard work and preparing for my sister’s graduation party that we’re hosting.

Whenever I haven’t been outside taking advantage of this weather, I’ve been in my bed rotating between Amazon, Netflix, and Hulu. I’ll be the first to admit that I’m not a fan of Amazon streaming for no reason other than that I’m a picky brat. I finally gave it a chance though. Out of all of the options available, I chose a 22-minute short film titled “Billion Dollar Bus Stop,” which was directed by a friend of mine. 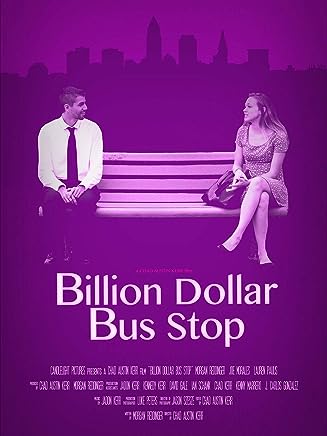 Billion Dollar Bus Stop is a dramatic short film adapted from a stage play written by the star, Morgan Reddinger. The film was shot last summer with a small crew of 3-4 people in Lorain, Ohio. Director Chad Austin Kerr said “I was really attracted to the simplicity of the script and I thought it would work well as a ‘one location’ short film,” and he was right. I especially liked the single location because after I was introduced to it, I was able to focus more on the lines and body language rather than any background changes. The film received the silver award for Best Actress, bronze award for Best Original Score, and Best Drama Short at the 2019 Independent Shorts Award. It was also an official selection for the Dumbo Film Festival in Dumbo, NY.

The official description on Amazon reads:

“A young writer [Eloise], seeking her purpose in life, meets a mysterious man [Oliver] at the morning bus stop who tries to win her heart. The unexpected couple discover things about themselves and one another but one important secret remains. We follow these dreamers as they struggle with life, love, and companionship – learning to never waste a moment.”

I’ve met a few men “at the morning bus stop” who also tried winning my heart, but I think “tried to harvest my organs” is more fitting. So before I talk about how great the film was, let’s make one thing clear- there are creeps out there so keep your guard up. Not every friendly guy at a bus stop (or elsewhere) is an Oliver.

Stars Morgan Reddinger (Eloise), Joe Morales (Oliver), and Lauren Paulis (Oliver’s sister) all had great performances in the film. Reddinger’s smartass portrayal of Eloise really kept me hooked from the beginning. I’m glad she was able to act out the character she envisioned because it felt so real. As a young woman who has had some strange encounters at bus stops, I understood the short and defensive comments she made during her first encounters with Oliver. Morales’ interpretation of Oliver was, well, magical. I couldn’t help but think to myself that he could play the love interest in any Hallmark movie and I would watch the shit out of it (you guys know how I feel about Hallmark movies).

The storyline is so unique. I have a habit of trying to predict what’s going to happen next, and I just couldn’t do it with this film. I may or may not have thrown my laptop during the ending scene from anger and disappointment as the twist threw me for a major loop, but I immediately picked it back up and watched it all again.

After talking to the director, I got some interesting information about the production of the film. One thing that almost made my head explode was that the rain in one scene was all created out of frame with a water sprayer. I’ll admit that when I watched the scene I wondered if they expected the rain or they just went with whatever weather came that day. Could’ve fooled me.

I have to give lots of credit to Morgan Reddinger for not only acting but also writing and producing the film. That’s pretty impressive. I took an acting class in college last fall where I had to act, direct, and “produce” for my then-major so I know how difficult it can be to have to act while also orchestrating everything around you.

I’d compare this short film to a couple of big Hollywood movies but I know that if I do that, it’ll completely give away the surprise ending of the film. If you watch it, you’ll probably know exactly where I’m going with this. You can watch Billion Dollar Bus Stop on Amazon for $2.99 HD/ $1.99 SD  for free with Amazon Prime.

Hi, I'm Megann! I'm a 22 year old communication major living in Cleveland, Ohio. I have a passion for college and lifestyle blogging and can't wait to share my takes with you! View all posts by megannlouise

Hi, I'm Megann! I'm a 22 year old communication major living in Cleveland, Ohio. I have a passion for college and lifestyle blogging and can't wait to share my takes with you!