Today I’ll keep it short and sweet because we should all be celebrating with our loved ones.

Thank you all for being one of the best gifts I could ever receive. You all mean the world to me and I hope you’re all having the best holiday season ever!

I’ll be back soon with more posts before the new year! But for now, let’s all be in the moment. Enjoy every little thing.

Merry Christmas from my family and I!

Before I get into today’s post, I have some side notes. I want to let everyone know that there was a slight scheduling mishap with my last three posts. For some reason, they never went public! But they’re up now, so check out My Winter Bucket List , Stocking Stuffers for College Students , and Photos I Want to Take This December! Also, I know this post is going up a little later than usual, and that’s because I really wanted to get this up TODAY but I also wanted to spend some time with my family relaxing. And again, finals are coming up so I’ve been hitting those books any chance I get!

Today I wanted to give you guys a little update on what I’ve been up to and how I’ve been feeling. I don’t want this whole blog to just be me talking about how I’m doing, but sometimes I like to check in and write in my “digital diary.”

Lately I’ve been doing pretty well. Things really seem to be looking up for me. Sure, little things have pushed my buttons here and there, but I haven’t let anything get to me for long.

I got to see an old friend of mine for the first time in almost two years, which is so crazy to think about! Andy had been in Japan doing his tough guy USMC thing and hadn’t been home since before we graduated high school. It was so much fun getting to see him and other old classmates of mine!

I’ve been focusing a lot on school lately, which is good for me. I was letting my poor mental health dictate whether or not I attended class or completed assignments for so long that my grades were taking some hard hits. I had to really buckle down for a couple weeks and study like crazy. I have finals tomorrow and Tuesday that will really be make it or break it for me. Keep your fingers crossed or send prayers if that’s your thing. I’ll be welcoming of whatever positivity you throw at me!

In other news, I’ve met someone. He’s really freaking cool and I can’t think of a single time that we’ve hung out where we haven’t been dying laughing together. Good signs, right?

I don’t want to say too much yet because I’m sure once the time is right, I won’t shut up about him. I guess you’ll hear more soon!

Quick thanks to everyone who has been keeping up with everything I’ve been doing on Instagram and Twitter while I’ve been taking my sporadic breaks on here! You guys are awesome!

We’ve made it to yet another year’s end and that means it’s time for Blogmas! Last year was my first attempt at Blogmas and it was such an epic fail that it pained me. But this year I’m back and better than ever!

This year needs to be different. I’ve grown and changed a lot and I really think I could redeem myself after last year’s utter flop.

I suppose today is sort of a cheat day by announcing Blogmas instead of doing an in depth post, but oh well. Let’s count it!

Time to get into the holiday spirit, right?!

We finally made it- the end of Blogmas.

I didn’t think I would make it this far. And I guess in a way, I didn’t. I was late uploading a lot of the time and couldn’t stick to my original schedule. However, I still managed to post 12 blogs in 12 days, and that’s something I am very proud of. My first Blogmas- at least in my eyes- was a success and I can’t wait to do it again next year.

When I wasn’t blogging, I was enjoying December and all it had to offer. I took a few pictures along the way and I thought I could share them all with you. Rather than explaining them in extreme detail, I thought I could just leave the photos to be interpreted by the viewer. So make of them what you will.

If you’ve been following my Blogmas posts, you probably can recall that I am not a huge fan of Christmas movies. To be completely honest, I don’t consider myself a fan of most movies. I hate having to pay attention to something for extended periods of time. I know, I know, I’m totally lazy. It just makes me feel like I’m wasting my time. However, there are a few holiday movies that I can actually sit through. If I  like these movies, I’m sure everyone else can find something to like about them too.

First, let’s get all the classics out of the way.

One of my first favorite Christmas movies. Tim Allen kills it. And the magic of the story is so fascinating. I just really love this freaking movie. A lot.

Alright… don’t attack me, but I had never seen this movie until two days ago. It started when my sister played (and killed)  the role of the mother when our hometown put on a production of A Christmas Story. That was my first time ever hearing the plot. Then, my boyfriend invited me over on Tuesday to help him put up Christmas decorations (yeah, he’s a procrastinator), and I was “rewarded” with a late night screening of A Christmas Story. I think it was easier for me to get through because I just thought about my sister’s lines versus the lines in the movie. But I really liked the story and purity of the movie. It’s super cute. Even though I almost cried when the dad’s turkey got eaten by the hounds. Spoiler alert, I guess.

Just like any other Hallmark storyline. Girl meets guy, guy is a butt, girl changes guy, girl and guy fall in love and live happily ever after. But this time… IT’S CHRISTMASSY. I really hate that all Hallmark movies have the same basic plot, but I can never take my eyes off the t.v. whenever one is on. I quickly became obsessed with this movie for no apparent reason. But since it’s not so much of a classic, I guess I’ll sum it up for you real quick. The girl, Jessica, comes to a small town to film a movie. She’s staying in a hotel owned by the town’s mayor, who is a …butt… and while she tries to keep it civil, they end up being a little more than civil, if you know what I mean.

Maybe I’m biased because I love Melissa Joan Hart, but this movie is so good. I first saw this when I was 10 (I think) and I think about it every Christmas season. It’s about a girl who is basically a miserable failure and doesn’t want to disappoint her family when she comes home for Christmas, so she kidnaps some guy and forces him to pretend to be her boyfriend. I’m just so interested in it because guess what… spoiler alert… THEY FALL IN LOVE. And I think we all know, that would NOT happen in real life. So I guess that’s why it’s on Freeform and not Crime Watch Daily. 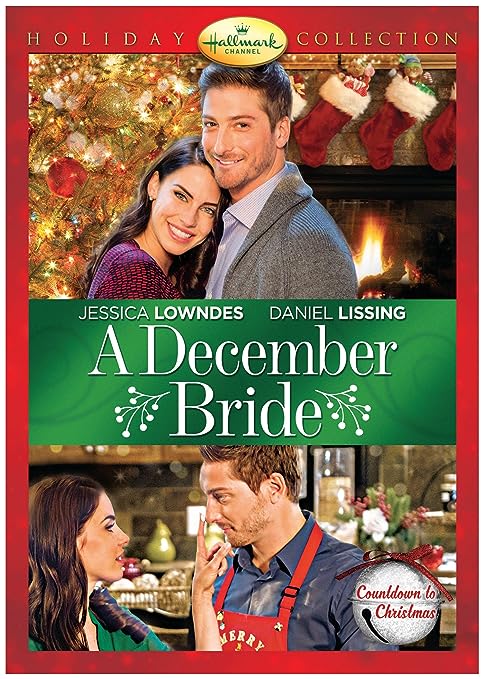 Another Hallmark movie. I’m sorry. If you’re looking for a painful romantic comedy that will make you feel a whole bunch of different ways by the end, this is the one.

I’m trying to get into the holiday spirit this year, so if you can think of any more Christmas movies that I should check out this year, let me know!

Happy December 12th! It’s officially the start of 12 Days of Blogmas!
I know most participants of Blogmas opt to write the first 12 days of December, but I was so busy with school and finals to do that. However, I didn’t want to leave everybody hanging all December long, so Blogmas starts today. Like it or not, it’s happening.

I haven’t done Blogmas before, so this could (and probably will) be a train wreck. I follow few blogs that are participating in Blogmas, and ultimately inspired me to give it a try. I’ll link my favorite Blogmas participants below for everyone to check out!

I have never been extremely festive throughout Christmas season. I love seeing family and spending time with loved ones, but I’m not one to go see Christmas lights, visit with Santa, or go ice skating like so many others do this time of year. Maybe by doing Blogmas it will get me into the Christmas spirit. That would be quite the Hallmark film, wouldn’t it?

I uploaded by upload schedule a while ago, but if you haven’t seen it here it is again.

I’m really excited to start Blogmas. If you’re feeling festive, check out these other bloggers and their Blogmas posts! They’ve got some  awesome posts up so far to ring in the Christmas season!

Hi, I'm Megann! I'm a 22 year old communication major living in Cleveland, Ohio. I have a passion for college and lifestyle blogging and can't wait to share my takes with you!